I have named this quilt, Teal Stacked Coins. This is my original design.

I started this quilt on retreat in October 2019. Originally I had thought I would alternate the string pieced units with solid units the same size as the string pieced rectangles. I had to abandon this idea after sewing a couple of columns together and realizing that I had too much bulk in the seam intersections to get the quilt to lay flat. I ended up playing with the layout on the design wall and ended up going with alternate blocks that were half the size of the string pieced rectangles and I added a plain sashing strip between the rows to remove those bulky seam intersections.

The string pieced units were pieced onto used Color Catcher sheets. The Color Catchers remain in the quilt. I have made many quilts from these 4″ x 9″ string brick units but I think this one is my favorite because of the Kona teal background.

The quilt was quilted on my long arm using the Swirls pattern with an 80-20 Hobbs batting that gives the quilt a bit of loft that helps define the quilting and makes it perfect for cuddling in front of the TV. This is a large lap size quilt–my husband is holding the quilt for the photo and it generously covers his 6’2″ frame.

Our quilt guild’s bi-annual show was this past Friday night and Saturday (October 17 and 18, 2014).  I was once again on the committee that hung the quilts.  We were very organized this year and had the quilts hung in record time.

I was also doing demos again this year. Unlike some other quilt shows, our guild does not just do demos at specific times during the show.  Our demos are on-going through the whole show.  This means that the people that are doing the demos are doing lots and lots of talking.  🙂  There were four of us doing demos this year.  We had the most perfect spot with perfect lighting against this bank of windows.

This was my home for a day and a half while I demonstrated how to make string/crumb blocks using a stabilizer.  I use used color catchers as my foundation, but any other stabilizer product such as muslin or paper could be used.  If you use paper, you will have to remove the paper before quilting your quilt.  This is one reason why I use the color catchers–there is nothing to remove; the color catcher is not removed and stays in the quilt.  Granted the quilt is a bit heavier because of the additional layer.

The woman doing demos beside me was demonstrating another technique for using up scraps–making those fabric wrapped bowls that are so popular now.  We were very complimentary to one another with our demos as we were both showing how to use up scraps that some people put would put in the trash.

The quilts that I entered in this year’s show were:

And lastly, my entry into the challenge for this year’s show; Roses are Red, Violets are Blue.

I was very tired by the time I got home after quilt show take down last night.  …but ask me in two years if I am ready to do this again and my response will be a definite, Yes!!!

I am busy working on another scrap quilt.  I am calling this one, Yin and Yang after the Chinese symbol by the same name.

I boldly entered this quilt in our upcoming guild’s quilt show on October 17 and 18 even though it isn’t finished yet.

This quilt will be 8 blocks wide by 13 blocks long.  So far, I have 8 columns put together so technically I am more than half way done.  🙂

The table runner that I started on January 2, 2012 is finally finished.  Sometimes it is not just the larger and more complex projects that sit as UFO’s for a very long time.

Here I am at our Guild meting last night showing my completed table runner.

We have a UFO Completion Contest at our Quilt Guild this year.  Although I took this completed table runner for show and tell last night, it doesn’t count towards the UFO Completion Contest as your UFO has to be from before 2012.  Because I started this project on January 2, 2012, I am just outside the time period for the contest.

I did show another project at Guild this month that does qualify for the UFO Completion Contest though.  I finally took “Plum Dotty” for show and tell at the Guild.  Plum Dotty was finished to the partial flimsy stage on July 5, 2011.  I say partial flimsy stage because after I had this one together, I put it on the bed and decided that it needed some more blocks to make it wider.  Adding just a few more blocks to make it wider proved to be a challenge because I had run out of the black and white and white and black dot fabrics.  After getting some help from a friend in Oregon who helped source out more fabric for me, I was able to add the extra blocks.  The quilt top then sat for a long time until I had time to quilt and bind it.  I finished Plum Dotty on September 12, 2013, just in time to show at the Fall Fair in our town on September 13 and 14, 2013.

Here is Plum Dotty on the bed.  This is a perfect quilt for winter – not only does it brighten the room at an often dreary time of year, but it is heavy with the extra foundation for the blocks and the flannel back.

Here I am at our Guild meeting last night talking about Plum Dotty during Show and Share.

I wish I could say that finishing these two projects has caught me up to date with my UFO’s, but sadly it barely scratches the surface. 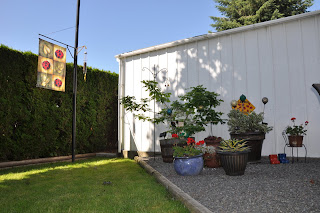 First, these are some pictures of our backyard.  My plant pots are visible from my kitchen window. 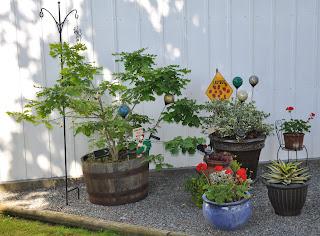 I think of this area as my little sanctuary.

We have been enjoying the feathered visitors to our yard as well.

This weekend was a long weekend for me (I was off from work Friday to Monday).  While North and South played on the laptop, I sewed.  It seamed appropriate that I was watching North and South–a made-for-TV miniseries about the Civil War during the July 4th (American Independence Day) long weekend. http://en.wikipedia.org/wiki/North_and_South_(TV_miniseries) 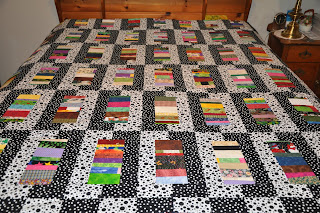 My friend, started to call this quilt a “conversation quilt”.  The strings are from many of the scraps and bits leftover from previous quilt projects.  Since each piece has a story to tell, the name conversation quilt was born. 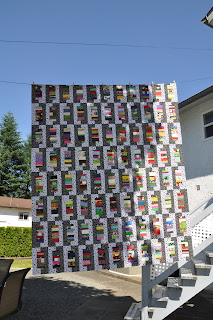 I used all I had of the two black/white fabrics that I purchased last weekend to make this quilt.  The quilt is plenty long enough, but it should be a little wider to better fit our bed.  A couple of my friends and I were discussing border options on-line.  Since this is a conversation quilt, we decided that the quilt would tell us what it needed for borders.  We listened, and with the assistance of a friend, I have secured more of the two black and white fabrics.  Once the fabrics are received in the mail, I will be making this quilt top two blocks wider.  Even though I almost always add at least one border to my quilts, this quilt definitely was not in need of a border. 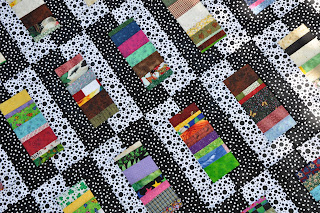