Our quilt guild’s bi-annual show was this past Friday night and Saturday (October 17 and 18, 2014).  I was once again on the committee that hung the quilts.  We were very organized this year and had the quilts hung in record time.

I was also doing demos again this year. Unlike some other quilt shows, our guild does not just do demos at specific times during the show.  Our demos are on-going through the whole show.  This means that the people that are doing the demos are doing lots and lots of talking.  🙂  There were four of us doing demos this year.  We had the most perfect spot with perfect lighting against this bank of windows.

This was my home for a day and a half while I demonstrated how to make string/crumb blocks using a stabilizer.  I use used color catchers as my foundation, but any other stabilizer product such as muslin or paper could be used.  If you use paper, you will have to remove the paper before quilting your quilt.  This is one reason why I use the color catchers–there is nothing to remove; the color catcher is not removed and stays in the quilt.  Granted the quilt is a bit heavier because of the additional layer.

The woman doing demos beside me was demonstrating another technique for using up scraps–making those fabric wrapped bowls that are so popular now.  We were very complimentary to one another with our demos as we were both showing how to use up scraps that some people put would put in the trash.

The quilts that I entered in this year’s show were:

And lastly, my entry into the challenge for this year’s show; Roses are Red, Violets are Blue.

I was very tired by the time I got home after quilt show take down last night.  …but ask me in two years if I am ready to do this again and my response will be a definite, Yes!!!

This weekend, I attended a two day workshop (August 8 and 9) with textile artist, Barb Mortell of Denman Island. Description of the first class from Barb:  Day 1 : Triangles, Diamonds, Value and Colour (Rulers rule!) Description:  This workshop is a composition workshop, and a place to make experiments in colour and value. Each person will make their own unique patchwork, and perhaps work out a system that sustains the artist for many months or longer. I know I could work on triangles for a long, long time without becoming bored of them, there are so many variations….We’ll be learning a variety of traditional and speedy techniques for making triangles one at a time and in bulk, and there will be instruction in cutting and sewing different types of triangles and diamonds.  Once we have decided on a technique, we’ll move into colour and value studies with the idea that the studies, perhaps with some bending and twisting and stretching,  will all fit together to create a small quilt top. The point is, with trials and experimentation, we will come away with a better understanding of Colour and Value, with the added benefit of trying out some new techniques.  We started the day with an inspirational show and tell of some of Barb’s work.

This was my little creative space for the two day workshop.  I shared my design wall with three other talented and inspirational quilters.  My HST’s are on the left of the design wall in this picture.  Do you recognize my signature green?  🙂  My squares were not sewn into blocks at this point.  I now have the HST’s arranged in an entirely different setting on my design wall at home.  I am trying to figure out what setting I like best before I commit to sewing my HST’s into blocks and my blocks into a small quilt top. The next four pictures are of other students’ work in the class.

I loved this piece.  This person plans on making her quilt top into a pillow.  She focused mainly on white, black, and grey with just a pop of the turquoise and purple.  Stunning!

Description of the second class from Barb: Day 2 (Saturday, Aug 9th, 2014) Improvising with a Simple Shape, with Focus on Colour and Value (Shake off the ruler)   Description:  We will decide on a simple shape, such as a triangle or diamond or ??? and play with scale as well as colour and value, with the aim of making a small composition. No real techniques taught here – just permission to free cut and lots of design help along the way.   If you were in Day 1, this is a great forum for carrying on with those experiments, or feel free to start fresh.   We started the second day with some more inspirational samples of Barb’s.

These were my blocks after the second day.  I was thinking that I should be naming my piece, “Pine Beetle Forest” since the Pine Beetle is the only thing I know of that will change a green pine tree orange/red with blue wood.  🙂  As you can see, I earned an “A” for my work from Barb! The following six pictures were taken around the room at the end of Day 2.  What an explosion of colour!

This was a great two days.  As always, I am recharged and inspired.

“It is value that does all the work, but colour gets the credit”  ~ Barb Mortell

It has been a long day, but a great day!  Today was our guild’s retreat.  Quilters from our local guild met from 10 am to 8 pm in a local school’s multipurpose room and sewed the day away.  It was a perfect day to be inside sewing as the weather outside was cold and wet.

We had several activities to break up the day–fat quarter toss, guessing the correct number of buttons in the jar, and a fascinator contest.

Fascinators are headpieces recently brought back in vogue by The Duchess of Cambridge.

This is two of our guild members proudly sporting their fascinators.  The gal on the left with the sewing themed fascinator won the most votes for her creation and captured the honour of “Most Creative”.

Although we all went home tired, we were all thrilled for a day to sew together with our friends.

Today was the first day I sewed with my Featherweight, Charlotte.  I was thrilled with her performance and I can see many sew-in’s together in our future!

…Sorry I can’t show you a picture of what I worked on for the day as it is a secret project–to be revealed later once complete.  🙂

I spent Worldwide Quilting Day in the best way possible – in the company of quilters at a quilt show!

My Quilt Guild arranged for a bus to transport 45 quilters for a day at the Quilters Anonymous 32nd Annual Quilt Show in Monroe, Washington.

There were over 500 quilts on display at this show so picking just one favorite was impossible.  These are some of my favorite quilts from that show:

There were quite a few vendors at the show.  These are the purchases that I made:

Dee of The Quilted Trillim  was in attendance with her realistic raw edge applique designs. Dee told me that with her no tracing applique technique, I should be able to make her Delicate Arch project in a weekend.  There are many tiny pieces in this pattern so I don’t think I will be making this one that quickly!

Michele Crawford of Flower Box Quilts was in attendance with her husband.  I was really impressed with the simplicity of the two blocks – Block A and Block B – that are behind the design of the quilts in Michele’s two books.  Once you make the two blocks the quilt designs are developed by sub-cutting those two blocks.  Very clever!  Michele indicated that she is now working on a third book in this series.

This is a picture of the cover of the pattern:  Snow Flurries.  This is a new design by Crabapple Hill Studios that I have been looking to make.

This is the pattern jacket from the Lazy Girl Designs’ bag pattern, Runaround Bag.

I also picked up some art cards by Rebecca Parker, two boxes of just white crayons, and some sparkle floss.  I attended a demonstration about how to colour stitchery pieces with crayons where I learned that you should first colour an area with white crayon before adding the layer of coloured crayon.  This technique is described by Crabapple Hill Studio on their website as:

Some of the patterns are tinted with Crayola Crayons. It’s a really fun technique that looks SO COOL when it’s done right!!! I like to start the process by coloring any area that’s going to be tinted with white crayon. It sort of “fills” the weave of the fabric and smooths it out to create a base for the colored crayons. It also helps with the blending of colors……….SO!!! You can go through quite a bit of white crayon in a single project. In “Calendula Patterdrip’s Cottage” I used almost 3 white crayons. Having to buy another ENTIRE box of colored crayons just to get one, single, lousy white crayon is just, well……maddening! But….having a little box of all white on hand…..is…..happy-ing! Yes, that’s a new word.

In the same demonstration I learned about a metallic look embroidery thread called, Cosmo Sparkle Thread.  I learned how adding a bit of sparkle floss to a stitchery project can add just a little special something to your project.  The Snow Flurries pattern that I bought uses sparkle floss, and crayons so I will be able to try out the new techniques that I just learned.

Lecien has been producing Cosmo embroidery thread in Japan since 1950. Cosmo thread is made from the best grade of Egyptian cotton available and its texture and sheen is equal to that of silk. Cosmo floss doesn’t twist and tangle like other flosses, and is easy to separate the strands for stitchery projects. Cosmo thread glides smoothly through fabric.

To use Sparkles – do NOT pull an end like you would with other flosses. Gently remove the paper sleeve. Handle gently and keep the loops in nice circles. Find where the knot is; these 2 ends are the ends of the 10 meter strand. Open the loop twice, until all that is holding the loops together is the knot. Gently pull the 2 ends of the strands till the knot is away from the loops and cut the knot. Carefully wind Sparkles around a spool or bobbin.

Today was the perfect way to celebrate Worldwide Quilting Day!

These are pictures from our last Quilt Guild meeting that was held on April 15.

These are pictures of quilts made by our members and donated to our We Care Program for charities.

A total of 18 quilts was handed in at this meeting.

You will recognize some of these quilts from our March workshop: http://silverthimblequilting.blogspot.com/2009/03/annual-guild-we-care-workshop.html 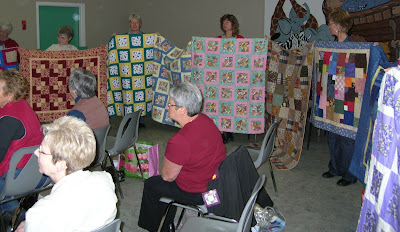 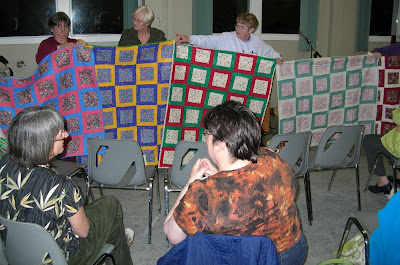