On September 5, 2012, my brother and sister-in-law celebrated their 25th wedding anniversary.

This picture of the happy couple was taken September 2, 2012 in the restaurant at the hotel/convention center where we celebrated their wedding reception 25 years ago.

My brother and sister-in-law have wanted one of my bed sized quilts for quite some time.  The marking of 25 years of marriage seemed like the perfect time to present them with a quilt.  I didn’t want to promise that I would make them a bed-sized quilt from scratch because I wasn’t sure exactly how long it would take to finish it with all of the other commitments I have.  So, I went to my stash of flimsies and picked “The Simple Cross” to quilt and gift to them.  Although they saw the quilt top on September 2, 2012, it wasn’t until June 22, 2013 that they were presented with a finished quilt.

This is a picture of the quilt on the bed at my brother and sister-in-law’s house on the evening of the day that the finished quilt was presented to them.

The Simple Cross was made from a pattern that was in the September/October 2000 issue of Fons and Porter’s magazine, For the Love of Quilting.  I started making the blocks for The Simple Cross on March 12, 2006 and finished the quilt to the flimsy stage on March 28, 2006.

Have you heard the New Year’s Day superstition that what you do on New Year’s Day will be what you do all year long?
We spent New Year’s Eve with our daughter and her fiance.  I don’t like family out on the roads New Year’s Eve with all the parties and drinking and driving that goes on, so we had them spend the night.  Because my daughter missed our traditional “Wife Saver Breakfast” on Christmas morning, because she had to work, that is what we had for breakfast on New Year’s Day morning.  After breakfast, my daughter had to head off to work, but it was nice having her here for New Year’s Eve and then breakfast the next morning.
After breakfast, it was time to focus on how to spend the rest of the day.  Linda and I discussed this issue on New Year’s Eve and decided that we definitely would not be doing laundry or housework!  We knew we wanted to focus on quilting, but which aspect of quilting did we want to focus on?  In the end, we decided to touch on as many different quilting aspects as we could manage to fit into the day. 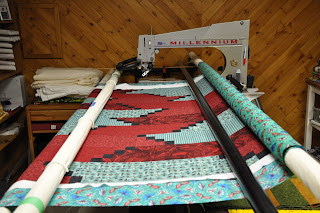 ﻿
﻿
I started my day by doing a few passes on the current quilt that is loaded on the long arm.  This quilt is, “Fire Escape”, finished to the flimsy state on September 11, 2011.  I just love this colour combination–red and aqua!  http://www.silverthimblequilting.blogspot.com/2012/01/blog-post.html 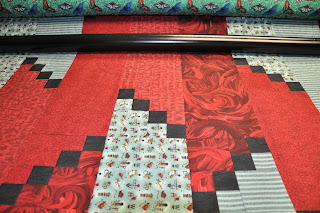 The next project I worked on was something that could be considered a reward–something quick to finish that would bring instant satisfaction of accomplishment.  I purchased a table runner kit on a blog hop in June 2006 that has been sitting safely in its plastic sleeve since that time.  I decided today would be the day to work on that project.  This was an old project, not really a UFO since it hadn’t been out of the plastic, that needed to be finished.   This one is now finished to the flimsy stage.  This runner finishes at approximately 50″ x 20″.  I love how this one turned out!

This runner is the same pattern as the runner that I finished up for my Mom for Christmas this past year.  http://silverthimblequiltingarchive.blogspot.com/2006/06/quilt-shop-hop-2006.html
In September 2009, I purchased the fabrics to make Terry Atkinson’s, “Got Stripes?” quilt.  This quilt is comprised of two blocks–a block made from striped fabrics and a star block.  I made the striped blocks right away and then set the fabric and pattern on the shelf.

When I took this one off the shelf to work on it, it took a bit to remember what fabrics I had decided to use where on the stars.  Only some of the fabrics for the star blocks had actually been cut.  Further confusing the situation was a navy blue batik fabric that I had also purchased at the time I bought these fabrics.  At the time, I thought I might make the star points navy blue.  I remember not being able to decide between the brown and the navy blue.  I ended up buying both fabrics and decided today to go with the brown. 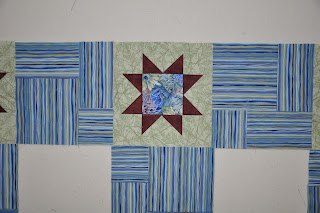 I am loving how this one is turning out.  I finished 5 of the 50 required stars for this queen sized quilt tonight before having to call it quits.  http://www.silverthimblequilting.blogspot.com/2009/11/current-projects.html
I think this was a very successful New Year’s Day!
– I stared the day with a wonderful meal together with my family.
– I managed to keep activities for the day related to quilting.
– I worked on using my existing stash.
– I resisted buying new fabric–even though there was a 50% off sale today at a local fabric store.
– I never did any housework or laundry.
2012 is shaping up to be a great year! 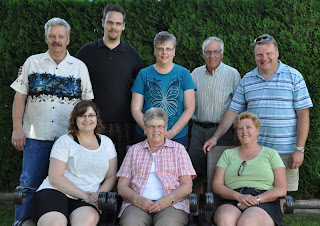 Today was a statutory holiday here in Canada.

We were able to get together for a great family barbecue in our backyard and enjoy the great sunny weather.  The only ones that couldn’t make it today were my daughter and her boyfriend – both had to work.

We took advantage of the opportunity of everyone being together today to take a family photo.  Pictured above – front row – left to right:  our son’s fiance, my mother, my sister-in-law – back row –   left to right:  my husband, my son, me, my dad, and my brother.

Tomorrow it is back to work.  🙁

Sockeye season is open here in BC! We have not had a sports fisherman Sockeye opening for 4 years so this is a momentous occasion!

We love barbecued salmon, so to celebrate the opening, we had some fresh Sockeye on the grill.

My husband is the official chef when it comes to cooking fish. 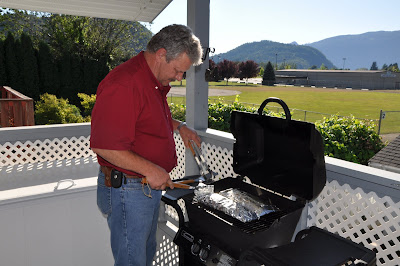 Yummy! We tried a new recipe this time that used peaches in the grilling process. 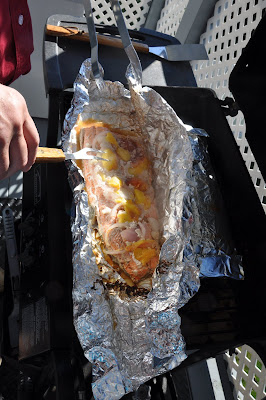 There were a lot of smiles around this table! 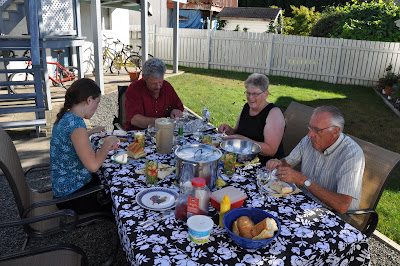 We left the reunion location in Alberta on August 2nd–the Monday of the August long weekend. We headed home via Kelowna.

While in Kelowna, we had opportunity to check out the local quilt shops. First up was Findlay’s. http://www.findlaysvacsew.com/ This shop is primarily a sewing machine dealer. They have a few nice shop samples and some yard goods, but the selection is limited. 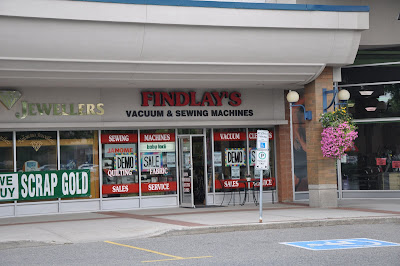 Our second stop was Linda’s. http://www.lindasquiltshoppe.com/ 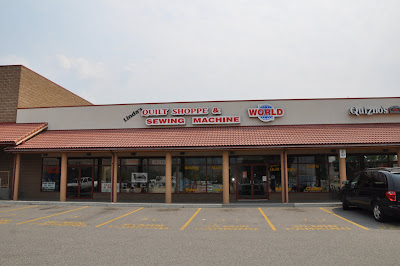 As soon as we parked, my husband noticed the sign….. 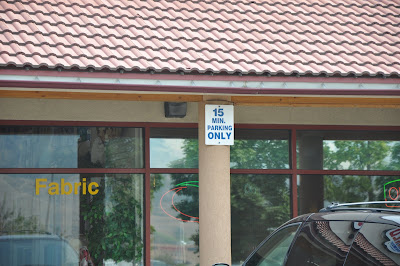 …….and made some comment like, “It looks like you only get 15 minutes here!” As he laughed, I had him turn around and look at the parking stall that we had parked in…. 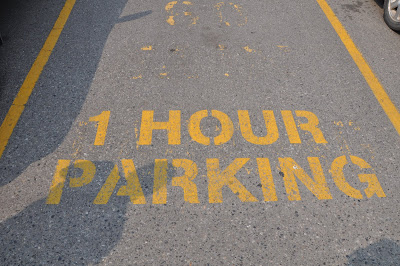 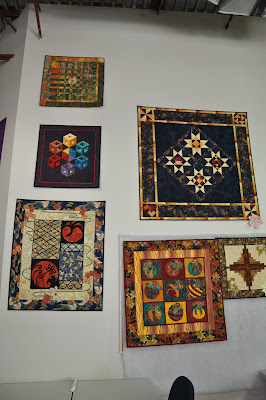 Seriously, an hour would never have been enough time to do this shop justice. The staff here were fantastic. I was treated to a tour of the shop, including the classroom. 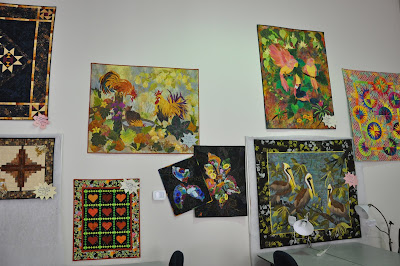 As it turns out, one of the ladies I had travelled on the bus trip to the Sisters’ quilt show with 5 years ago is a regular teacher here. I was thrilled to see Laurie’s quilts. We’ll have to see if I can get back to Kelowna sometime in the future for one of Laurie’s weekend classes. 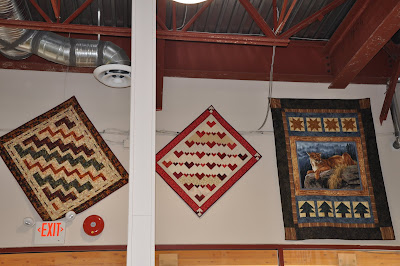 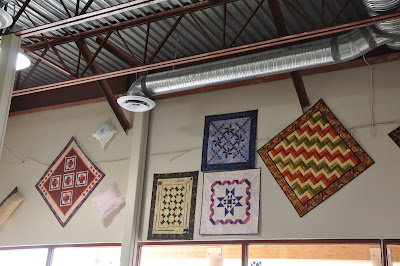 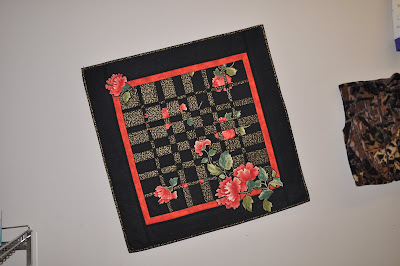 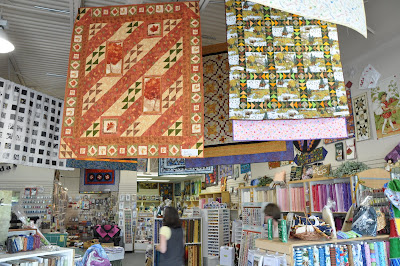 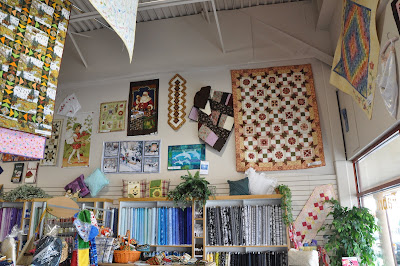 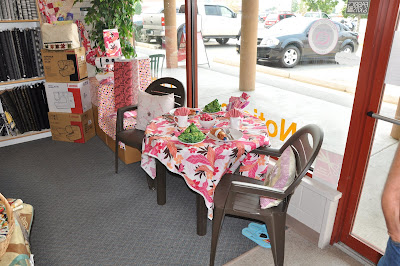 I loved this picnic display by the front door. They used food fabrics as the food on the table–too cute. 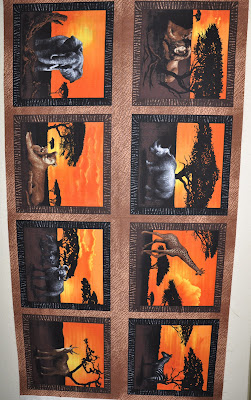 This African panel was one of the purchases I made at Linda’s. I have been collecting African themed fabrics for a while to make a quilt for my daughter. 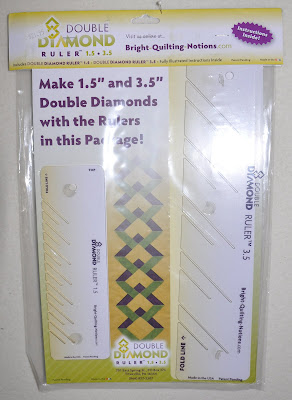 This ruler was also a purchase made at Linda’s. They had a sample in the shop made using this ruler. You fuse two fabrics together and then fold and use the ruler to make the cuts. Once the fabric is cut, you fold the pieces and you end up with a Seminole pieced look. 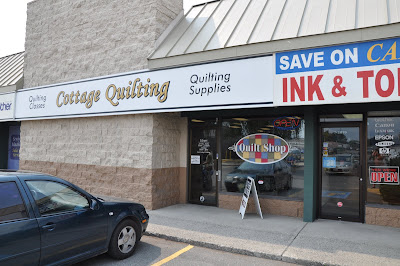 By this time we were hungry for some lunch. I asked my husband what he felt like having for lunch. He replied that he could really go for Wendy’s. Well, wouldn’t you know it, in the same parking lot as the Wendy’s was another quilt shop. http://www.cottagequiltingonline.com/
This was a nice shop, but it didn’t have near the selection and samples as Linda’s. 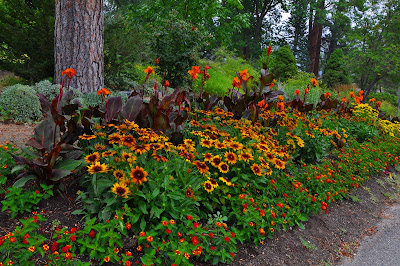 Then we headed out of Kelowna down the Okanagan Lake. We stopped at Agriculture Canada’s Research Station in Summerland. http://www4.agr.gc.ca/AAFC-AAC/display-afficher.do?id=1180620561099 They have a gorgeous display garden there. The view of the lake would have been incredible had it not been for the thick smoke from the forest fires in BC that blanketed the lake and obscured the view. None the less, we enjoyed walking around the gardens before getting back in the truck and heading home.
This was a great holiday!