Skip to primary content
After our stay in Santa Fe, we headed north to Colorado.  ﻿We awoke in Colorado Springs to a dusting of snow.  As the sun warmed the ground the snow melt everywhere except Pikes Peak visible in the background of the Garden of the Gods Park in the picture below. 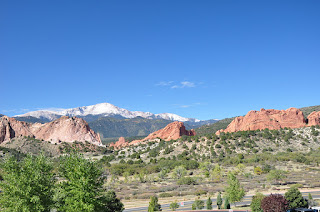 In August 1859 when two surveyors started out from Denver City to begin a town site, soon to be called Colorado City they came upon a beautiful area of sandstone formations. One of the surveyors suggested that it would be a “capital place for a beer garden” when the country grew up. His companion, exclaimed, “Beer Garden! Why it is a fit place for the Gods to assemble. We will call it the Garden of the Gods.” It has been so called ever since.

Below is a picture of Balanced Rock within the Park. 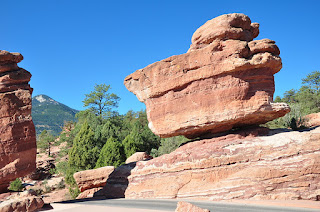 ﻿This is a picture of my husband posing as though he was the full weight of the rock on his shoulder. 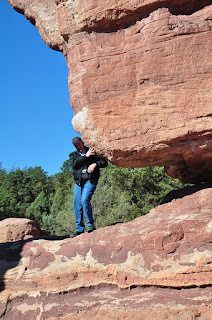 To get the perspective of size, this is a picture of my husband next to the rock. 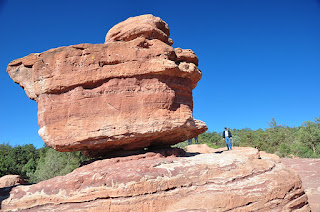 After leaving Garden of the Gods, we travelled down the highway to Denver.  We enjoyed a tour of downtown Denver with our step-aboard guide which included an inside look at the Capitol building.
﻿ 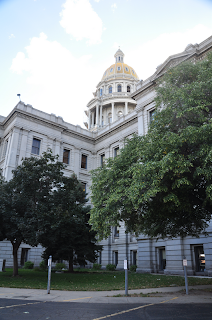 The capitol building was built in the 1890’s and in 1908 24 karat gold was used to plate the dome. The gold plated dome commemorates Colorado’s Gold Rush days, and the early pioneers and miners who helped build the state of Colorado. 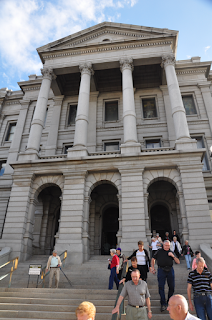 The architecture inside the Capitol building was spectacular. 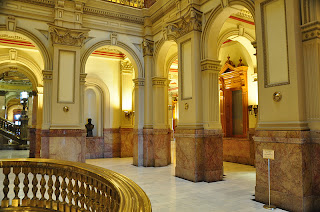 The interior of the capitol was built with the rare and priceless Colorado Rose Onyx.  The mauve marble is so rare that its known supply was completely used up in the process of beautifying the capitol. 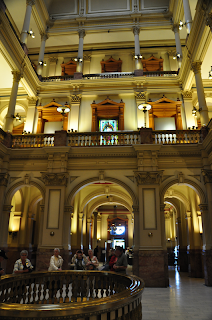 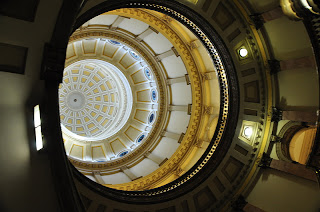 This quilt, hanging in the Capitol building is comprised of blocks that symbolize Colorado.  The 19 stars on the left and right side of the quilt represent the 38th state–Colorado.  A total of 250 hours of hand embroidery and machine stitching was necessary to complete the quilt.  The quilt was originally hung in the 2007 Colorado Quilting Council Quilt Show which was held in the Capitol building.  What a fantastic location for a quilt show! 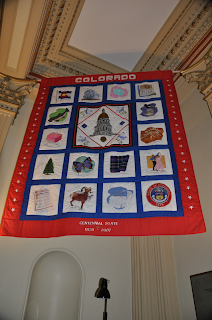 I spied this quilt hanging in the office of the Governor. 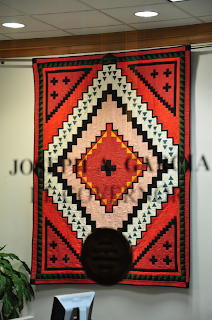