Skip to primary content
From Santa Fe, we took a day trip up to Taos.  In Taos, we visited the Taos Pueblo.  The Taos Pueblo is the only living Native American community designated both a World Heritage Site by UNESCO and a National Historic Landmark. The multi-storied adobe buildings have been continuously inhabited for over 1000 years. 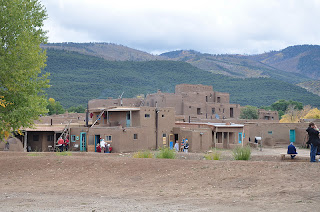 The Pueblo is made entirely of adobe — earth mixed with water and straw, then either poured into forms or made into sun-dried bricks. The walls are frequently several feet thick. The roofs of each of the five stories are supported by large timbers hauled down from the mountain forests. Smaller pieces of wood are placed side-by-side on top of the large timbers; then the whole roof is covered with packed dirt. The outside surfaces of the Pueblo are continuously maintained by replastering with think layers of mud. Interior walls are carefully coated with thin washes of white earth to keep them clean and bright. The Pueblo is actually many individual homes, built side-by-side and in layers, with common walls but no connecting doorways. In earlier days there were no doors or windows and entry was gained only from the top.

The North-Side Pueblo is said to be one of the most photographed and painted buildings in the Western Hemisphere. It is the largest multi storied pueblo structure still existing. 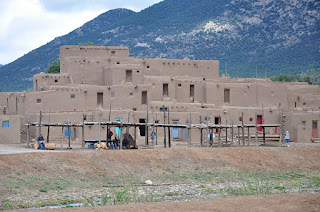 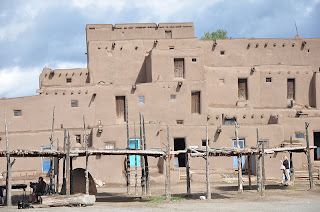 The pueblo wall completely encloses the village except at the entrance.  The wall used to be much taller for protection from surrounding tribes.  ﻿The pueblo’s primary purpose was for defense. Up to as late as 1900, access to the rooms on lower floors was by ladders on the outside to the roof, and then down an inside ladder. In case of an attack, outside ladders could easily be pulled up. 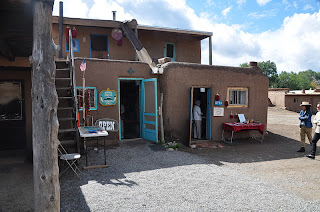 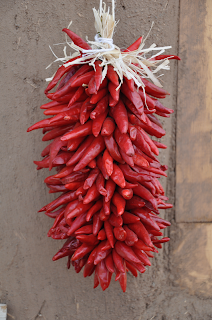 This is a picture of me with our guide–a university student who supplements his income by narrating tours of the Pueblo.  I asked him if he was often asked to pose for pictures with tourists.  He told me that yes, he did get lots of requests, but he didn’t mind as he thought it was neat to be in photo albums all over the world. 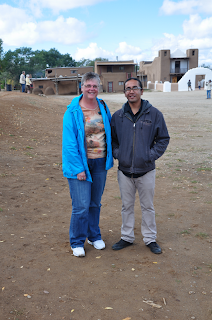 After visiting the Pueblo, we headed into Taos to the Taos Plaza.  Our bus parked in a parking lot within walking distance of a quilt shop–Taos Adobe Quilting.
http://www.taosadobequiltingandmore.com/

This is a picture of me outside the shop. 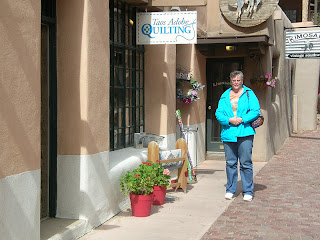 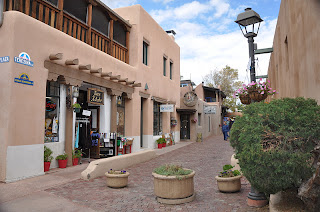 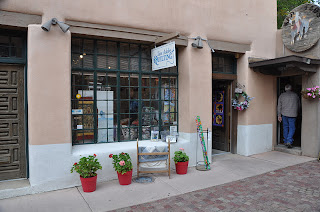 The shop was small but jam packed with colourful fabrics. 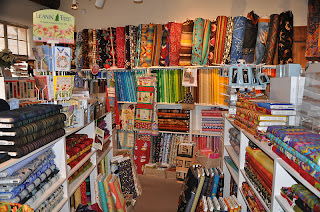 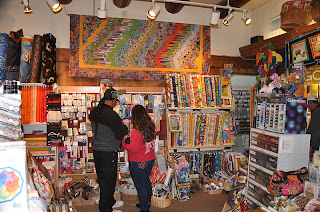 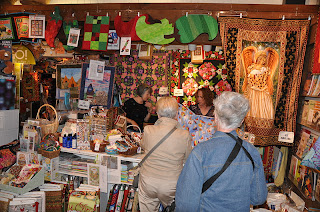 I bought ﻿a selection of SW Themed fat quarters… 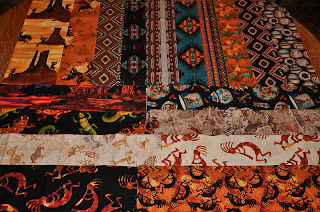 …and a kit to make a pepper table runner.  The pattern and fabrics are from a collection called Caliente Peppers by south Sea Imports.  We have seen lots of red peppers hanging from buildings and in doorways so this table runner will definitely remind me of my trip to the SW. ﻿ 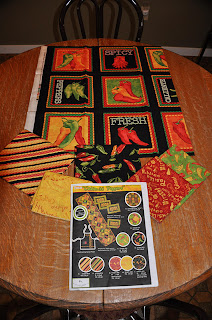