In Santa Fe, we visited the famous and beautiful Loretto Chapel.
The story of the Loretto Chapel began with the appointment of Bishop Jean Baptisite Lamy to the New Mexico Territory in 1850. The following year, Father Lamy asked the Sisters of Loretto to establish a school for girls in the town of Santa Fe.

In 1853, the Sisters opened the Academy of Our Lady of Light (aka Loretto). Over the next twenty years, the day and boarding school flourished and grew. By 1870, the Sisters believed the school needed a chapel. Funds were raised, land was purchased, and in 1873, work on Loretto Chapel began.
﻿ 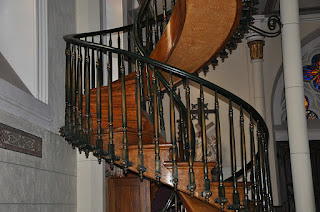 Only as the Chapel neared completion did the Sisters realize that access to the choir loft, 22 feet above, would have to be by ladder. A staircase would take up too much space in the small chapel. Climbing a ladder to the choir loft would be a great difficulty for the Sisters. This posed an impossible dilemma that no architect or carpenter was able to solve.

According to the story, the Sisters, seeking an answer to their architectural design dilemma, made a novena to St. Joseph, the patron saint of carpenters. Legend says on the ninth and final day of the novena, a man showed up at the chapel with a donkey and a toolbox looking for work. Months later the elegant circular staircase was completed and the carpenter disappeared without pay or thanks. Some believe that he was St. Joseph himself.

The staircase is a wonder. Some of the design considerations are said to still perplex experts today. Built without nails (only wooden pegs) the staircase has two 360 degree turns with no visible means of support — a kind of double helix design – and with no railing. It was not until 1887 — ten years after the staircase was completed — that an artisan added the railing.

There are also design questions about the number of stair risers compared to the height of the choir loft and about the types of wood and other materials used in the stairway’s construction — some of which appear not to have been available from any known local source.

The staircase in Loretto Chapel is truly a miracle of construction and design. 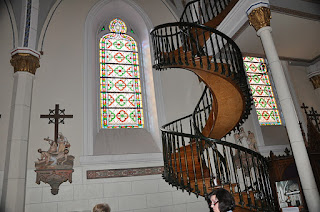 After visiting Loretto Chapel, we wandered through the shops in the Plaza in downtown Santa Fe. 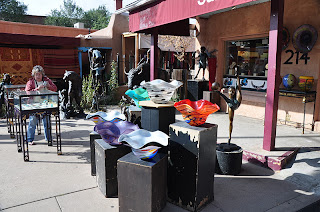 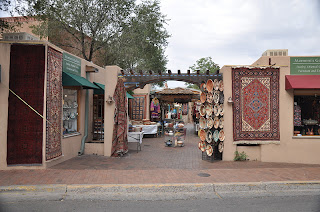 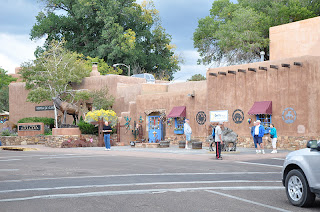 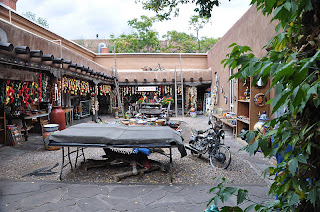 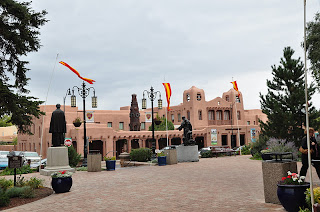 I didn’t find a quilt shop in the Plaza, but I did find these wonderful textiles and quilts hanging outside of a colourful little shop. 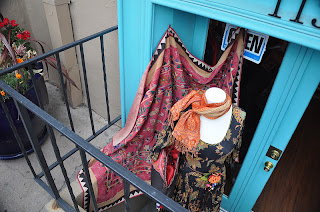 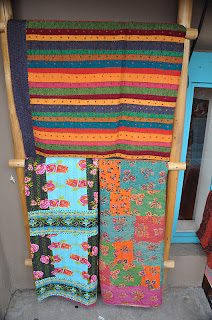 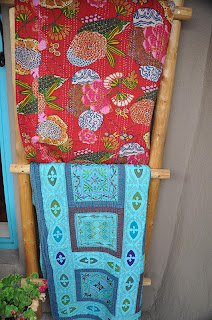