The last post left off in Roseburg, Oregon on the morning of Monday, May 19. After doing a bit of shopping and touring in Roseburg, we headed back north along I-5. One of today’s stops would be Yoncalla. In order to understand why Yoncalla, Oregon was one of our destination points, you will need to understand a bit of history. 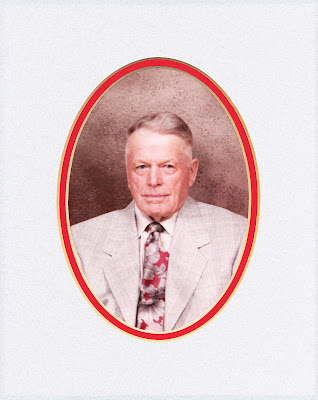 This is a picture of my grandfather (my Mom’s and Aunt’s father): Clinton Clifford Clark.

“I was born Oct. 12, 1911, son of Roy and Essie Clark. I was born on the farm (in Sask.) now owned by Gerald Clark which was originally owned by my grandfather who had come from South Dakota in 1902. My mother died when I was born, so then I was raised by my grandparents who I only knew of as my Mom and Dad. So the result was that I was taken everywhere they went so I had several trips to the States. So in this way, I was always classed as their son and cousins were cousins.

My grandfather owned a farm in Oregon so he went down there every other year or so, and I was always taken along. My grandmother also had a brother Oscar that lived in Douglas County. Oscar had a son Percy who was the same age as I was so we always have been the best of friends. The last time I was to Oregon with them was the winter of 1923-24. That same winter we went on and spent the winter in Riverside, California. On that trip we stopped over at Stockton and Sacramento, California. My grandmother had an aunt living at Stockton. On the way home we stopped over at Uncle Oscar’s again. I always used to go to school with the cousins when there. I also went to school in Riverside.

Now on my grandmother’s side of the family were Mary, Erwin, Herbert, and Oscar, and another girl that died fairly young. I remember reading in a diary when we were in Oregon about a sister visiting at Newt and Mary’s quite a lot and she was always sewing.

The Clarks and Langdons must have been in Wisconsin before going to South Dakota and then some of the Langdons went to Oregon and the Clarks came to Canada in 1901 and 02. The Langdons now living at Yoncalla, Oregon are all Oscar Langdon’s family.”

(Taken from handwritten notes that my grandfather sent to me many years ago when he was still alive.)

My mother had been to Yoncalla when her father, my grandfather was still alive. My aunt and I had never been to Yoncalla. So with a map of sorts and handwritten directions from one of Percy’s daughters, Ginger, we headed out to see if we could find Percy’s home in the hills above Yoncalla. (Note: Percy has also passed away.) 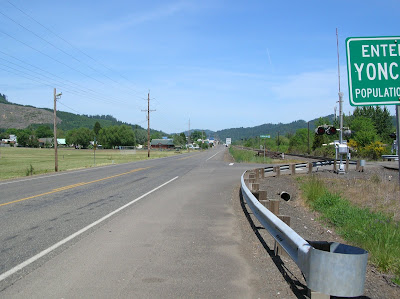 This is “Main Street” Yoncalla. We drove through Yoncalla and I thought it looked a lot like “Small Town, Saskatchewan”. The road to the immediate right in the picture above is the road we took to head into the hills in search of Percy’s house. This was the beginning of “back roads R us, Oregon” in the words of Pam. 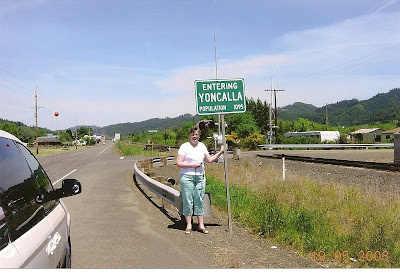 Of course, we had to take advantage of a couple of photo opportunities. this is me, holding up the Yoncalla sign. 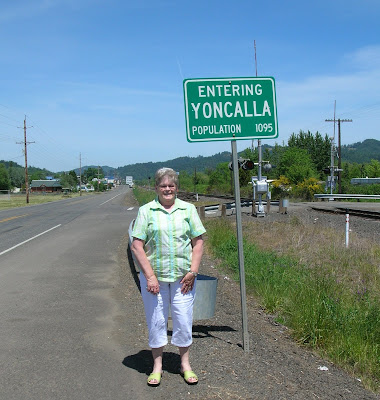 What is good for one, is good for the other. This is my mother standing beside the Yoncalla sign. It would appear that my training of the sign provided for a well-behaved sign and my mother did not need to hold it in place as I had. LOL 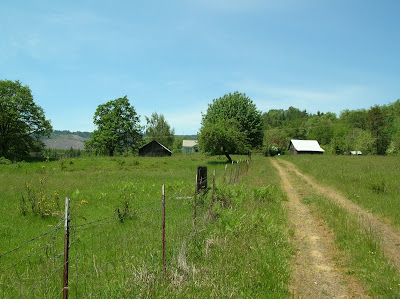 We drove in the hills above Yoncalla for miles. At one point we went under the freeway. We passed one fork in the road where I would have turned had I been travelling by myself, but my mom was doing the driving and we headed on.

We headed up and down hills, around corners that would break the back of snake, sometimes coming upon the most beautiful, expansive homes and at other times coming upon the smallest, oldest, barely held together homes that were still occupied. Such stark contrast. At one point we ran out of pavement and I remember my mother saying that she never ever remembered running out of pavement when she was here before. I was nervous at this point because I thought she might turn back. We were driving in her perfectly clean white van that DOES NOT DRIVE ON GRAVEL! My mom kept driving and my aunt and I kept track of the house numbers (if they were present at all) on the mailboxes. Finally, I announced that we must have gone past it as the numbers were larger than Percy’s address. My aunt had seen a woman in her yard on the previous property so we turned back and my mom got out to ask directions. It turns out that we had passed the property–just two farms back. We headed back and located the house. 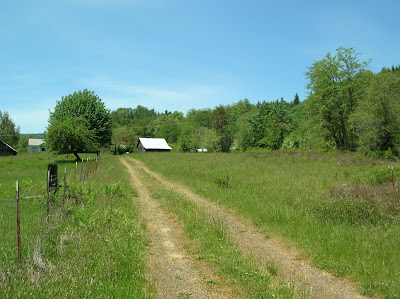 The woman had warned us that it was a little unkempt as it had not been lived in for a while. The property is still owned by family members, but no one currently lives in that house. 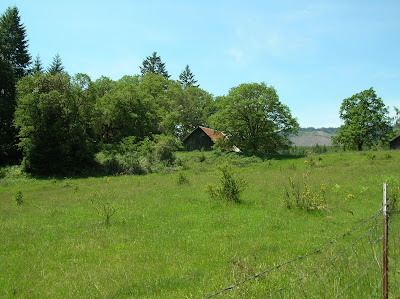 So this was Percy’s property. This property had belonged to my grandfather’s cousin and in his words, also his best friend. 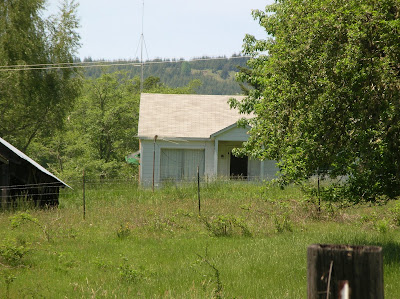 Percy and his family were very musical. When my parents were visiting here one time, they told of Percy’s family getting out the fiddles and starting to play. Pretty soon, neighbours started to arrive with their instruments in hand and an impromptu band was formed. They just walked over the hills, through the fields as they heard the music start. No need to phone anyone! 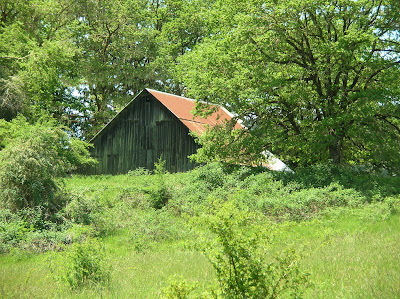 This was a very peaceful and serene location. I can understand why my grandfather had so many fond memories of this location. 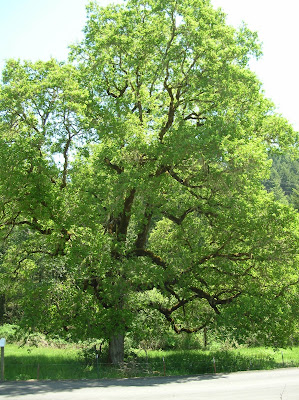 I was grateful for beautiful weather and a mother that sacrificed her clean van to persevere to this location. We then headed back down the windy road to Yoncalla. The woman who had provided directions was also familiar with where Percy’s son now lives and she was able to give us very specific directions so that we could locate his home on our way back to Yoncalla.

We headed back out to I-5 and on to Portland.

I had heard about Fabric Depot in the past, and when Pam mentioned it during our visit in Roseburg, I knew I HAD to get there. We took I-205 which is the truck route around Portland. If you take Exit #20 and head down Washington St., you can’t miss it. If you are in the Portland area, it is a must see/must stop! Once we found Fabric Depot and got through the doors, I was speechless! According to their website: https://www.fabricdepot.com/, they are the largest, most complete fabric store in the west at over 73,000 square feet and boasting 8,000 bolts of quilting fabric! If you are a quilter, this place will put your senses into overload for sure! 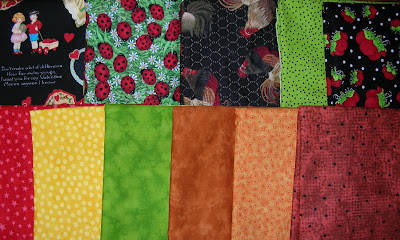 This is the only quilt store that I have used a shopping cart to purchase my fabrics! As I looked around, there wasn’t a shopper in the place that didn’t have an overflowing cart of fabric. 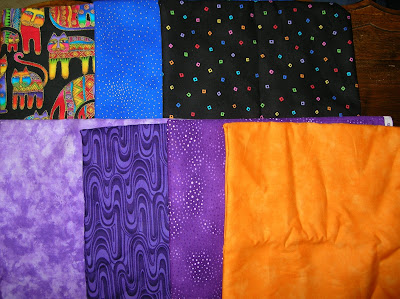 These two pictures are of the fabrics that I bought. I was on the hunt for bright oranges, greens, yellows, etc. to use for a planned Halloween quilt. The fabrics needed to read as solids as they will be used as borders around colourful Halloween fabrics. Some of the other prints were just too cute to resist and they jumped into my basket. LOL 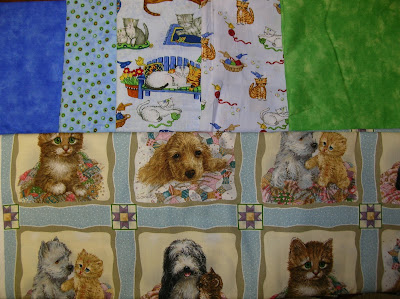 My aunt even found some irresistible fabrics. She wants me to make her a cat themed table topper. 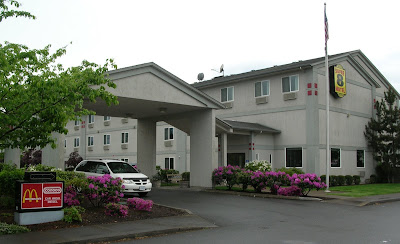 After the shopping at Fabric Depot, we stopped at a mall next to I-5 in Portland and my Mom and I found the most wonderful shoe store that was having a sale! After purchasing souvenirs there, we stopped at Olive Garden for lunch–a first for my Mom and Aunt. Then we headed back onto I-5. We were now in hunt of an outlet mall we had seen on the way south at Woodburn. We ended up staying at the Super 8 in Woodburn.

This motel was mid-way in price between the previous two we had stayed in. Nice and clean and a continental breakfast was included. As you can see in the pictures, that beautiful blue sky had disappeared and yes, that is wet pavement. It rained off and on all the way home from here. 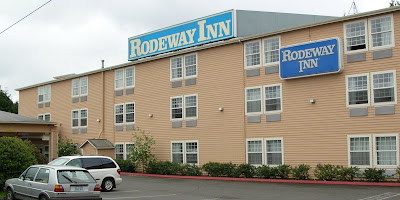 We spent the next day travelling as far north as Bellingham. This is only about 1 1/2 hours from home. It was hard to find a vacant room–there were golf tournaments going on and most rooms were taken. We ended up staying at the Rodeway Inn. Of all the motels we stayed in on this trip–this one gets the worst rating. This motel is in need of a serious makeover! I would not recommend this motel to anyone! Rodeway Inn is a chain, but we are wondering how this particular motel is keeping its franchise–no one from Rodeway Inn head office could be taking a look, believe me!

The next day was Wednesday and we planned on one more look at another Kohl’s. I have been looking at Fiestaware dishes for some time and took the opportunity to purchase 6 scarlet coloured fruit nappies on sale at Kohl’s. I want to see how these dishes stand up to everyday use before I invest too much into replacing my current dishes. I also wanted to see if my husband was going to object to the colour. *VBG* Take a look: http://www.hlchina.com/fiestaretail.htm I also learned that if I am going to do much shopping at Kohl’s, I need to shop on Tuesdays with my Mom in tow. Not only were my dishes on sale, but I received a further Seniors discount when my Mom paid for my dishes! In fact, speaking of Seniors discounts, we got smart part way through our trip and started asking for the Seniors discount on the motel rooms too! We are learning!

After more looking and shopping in the mall in Bellingham, we headed north to Lynden where we did some grocery shopping and then having done our fair share of stimulating the Amercian economy, we headed for the border. Because it was during the week and no holiday, the lineup was minimal and we were through in no time.