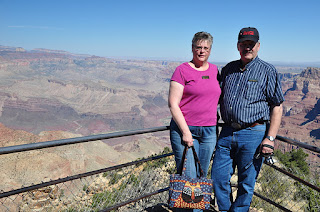 This is another view of the canyon taken from a viewpoint at Grand Canyon Village, just behind Bright Angel Lodge. 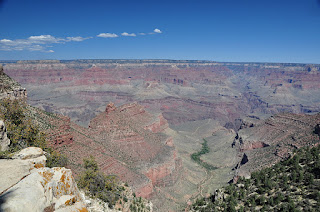 The next photo is taken of the Painted Desert within the Petrified National Park.  We had a very brief photo stop in this park. 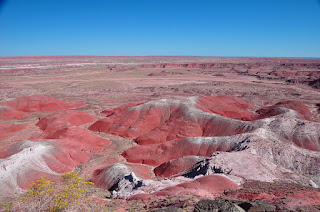 We really enjoyed our tour of the Acoma Pueblo and Mission, located 1 hour east of Gallup, New Mexico.  Acoma Pueblo’s Sky City is situated on a 370 foot high mesa. This is the homeland for the Acoma people. There are 300 homes and structures on the mesa which are owned by Acoma women. They are passed down in their families. This is said to be the oldest continually inhabited community in the country, dating from around 1150 AD.

If you click on the next photo, you will be able to see the pueblo on top of the mesa.  There were no roads to the top of the mesa until John Wayne came to the Acoma people in the late 50′s and wanted to make a movie.  The road was the result of a barter for the right to film a John Wayne movie.  The “John Wayne Highway”is the primary access point to the top of the mesa today.  Most of the 4,000 tribal members live in the nearby villages of McCartys and Acomita–only a handful occupy the mesa on a full-time basis.  However, most families maintain homes on the mesa which they use on feast days and as summer getaways.  There is no running water or electricity on the mesa and plumbing is accommodated via out-houses located on the mesa rim. 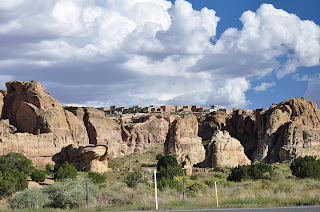 We were provided opportunities to purchase pottery and other art directly from the artists as we walked through the pueblo on our tour. 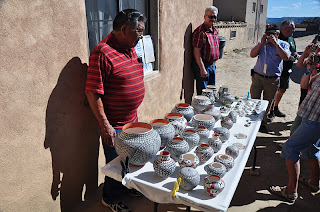 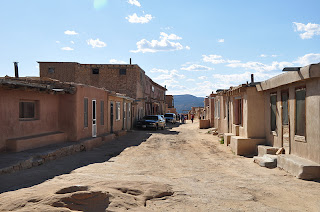 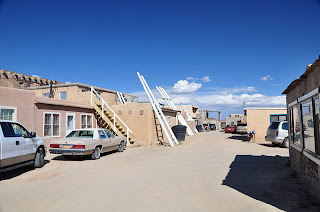