My version of the Jelly Roll 1600 was crying out for something. I quilted my top with swirls and I added a narrow flap of red fabric just before attaching the binding. I am now in the process of adding applique ladybugs to my canvas of green grass. 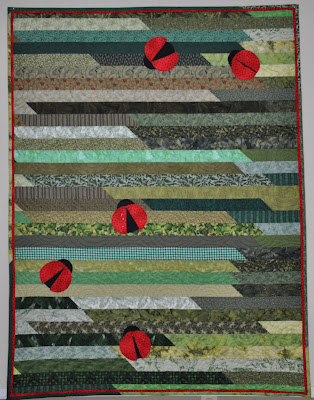 I am adding 5 ladybugs for the 5 FABs. 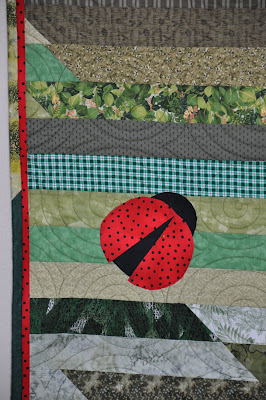 My ladybugs are only pinned in place. I will spend evenings doing the hand stitching to fix the bugs in place permanently.

In 2008, the FABs started regular quilt challenges. 2011 is the year of the FAB Bday Party Challenge. First up was Pam, with a birthday on January 29 that for 2011 was moved to February 26. By February 26, not all parcels were received yet by Pam so we delayed the birthday party to March 5.

At 7 am Pacific timeon March 5, all FABs were positioned in front of their computer screens, chatting on line as we waited for Pam to open each of her gifts.

Pam is a big ME (Mary Engelbreit) fan. I had scraps of some ME fabrics in my stash and so I used those to make a ME inspired bag. The pattern is called, Market Bag and is a Terry Atkinson design from her book, Let’s Do Lunch. 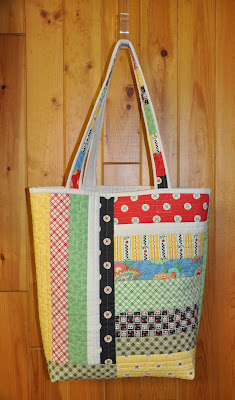 This is one side of the bag. 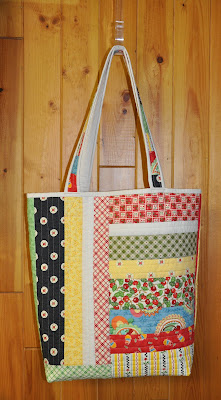 This is the other side of the bag. 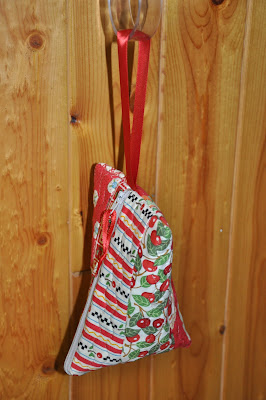 I also made a matching triangle bag. This bag is made from the Humbug bag pattern. 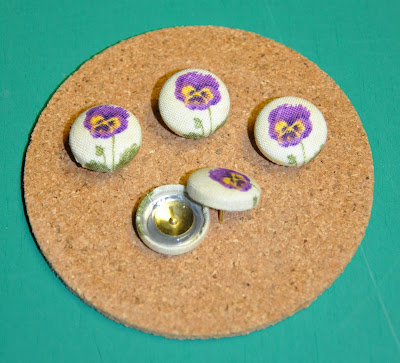 Pam was also the recipient of the 5th pansy project – the first 4 were posted here: http://silverthimblequilting.blogspot.com/2011/02/pansy-finishes.html
These are thumbtacks made from fabric covered buttons.
After the presents were opened, we were on to the rest of the party. After watching the video on Youtube for the Jelly Roll 1600, Pam decided we should all make one of these quilts during her Par-Tay. Pam and Cher used Jelly Rolls, and Linda, Pat, and I used strips cut from our stash.
After joining your 2.5 inch strips together end to end, you will have 1,600 inches of fabric. (Note: Pam used some of her Jelly Roll strips for another project so she made the Jelly Roll 1080). Take the end of your strip and match it to the beginning of your strip and put the pedal to the metal and sew! You will be working on one long seam–800 inches long. You repeat this 5 times and end up with a lap sized quilt. There is to be no pressing of seams until the top is together. This is what my version looked like before pressing. 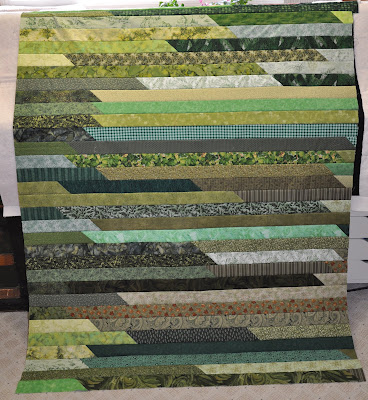 Within 2.5 hours, all 5 of us had our tops completed. The woman on the video claimed to have made her quilt within 35 minutes. I think it took longer than 35 minutes for me to complete my first seam!

We had a great day sewing together. This project may not have been something that anyone of us might have attempted on our own, but in the spirit of the FABs, we all gave it a try and had a blast doing it!
If you are interested in seeing the lap quilts made by the rest of the FABs, have a look here: Pam, Cher, Linda, Pat