This was tonight’s catch.

Prior to this year, I was a “fish snob” of sorts. My favorite salmon is Sockeye. Sadly, these fish are not Sockeye, these are Pink salmon–specifically females.

This year there are no Sockeye salmon to be had. I find myself excited now that we have any fish at all–even if they are Pinks! My how things have changed. 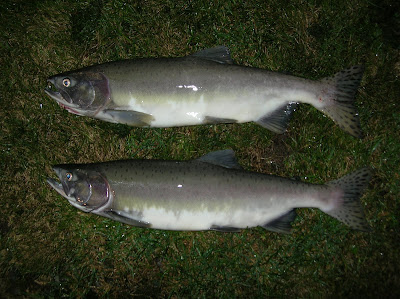 Earlier this month we were in Skagway, Alaska and enjoyed a Sockeye Salmon barbecue. This is our chef serving up this yummy salmon. 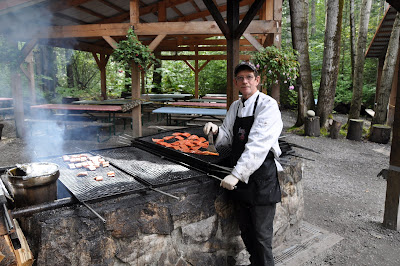 This fellow had a wonderful sauce that we added to our salmon on the plate. It was delicious. When asked, he was able to produce a copy of the recipe from his pocket.
In double boiler melt 1/2 lb butter
stir in well 2-3 cups brown sugar
add 1/4 cup lemon juice
1/4 cup pineapple juice
Note: For pork chops or ham, add: 1/4 cup soy sauce and garlic salt

I am sure this sauce won’t make our Pink salmon taste like Sockeye. However, this is the first fresh salmon of the season and I am sure it will be enjoyed just the same when we cook it up for supper.

What has happened to the Sockeye? Read the following borrowed from the CBC News site, published on August 13, 2009.

Scientists and others are scrambling to determine what happened to millions of sockeye salmon that defied their predictions and failed to return to the Fraser River this summer, leading to the closure of all the sockeye fishing on the river for the third year in a row.

After two of the leanest years on record, scientists had predicted a healthy return of sockeye in 2009. But the most recent numbers show this years’ Fraser River is only expected to be 600,000 fish, about seven percent of the original prediction of 8.7 million, making it perhaps the worst return on record.
The original prediction was largely based on the strong spawning year in 2005 and the salmon’s 4 year life cycle, but was considered to be accurate only 50 percent of the time.
…the cause of what is now three years of low returns is unclear.
Some experts blame warmer ocean and river temperatures, and declining food supplies in the open oceans for failing salmon runs.
But warmer temperatures can not fully explain the demise of so many fish.
Scientists, environmentalists, politicians, and fish farmers have been arguing for years about the impact salmon farms are having on young salmon fry, with many opponents of fish farms predicting sea lice from the industrial operations would decimate wild salmon stocks.
One thing is for sure, you can always count on the optimism of a fisherman. My DH is hopeful that next summer will yield the return of the elusive Sockeye.