Skip to primary content
Mom and I headed south to Oregon for the FABS + 2 retreat on Thursday, August 6. We weren’t due to meet up with the rest of the group until the Friday, but we thought if we headed down a day early we would be able to get in a little shopping before the retreat.
Our hotel reservation was at the Phoenix Inn Suites in Tigard. http://www.phoenixinn.com/tigard/ This is a fabulous hotel and I would not hesitate to recommend it to anyone. We were conveniently located across the street from the Washington Square Mall.
In that mall was Macy’s where we found our Fiestaware dishes on sale. We loaded up on the newest colour, Lemongrass (a beautiful bright green), Chocolate (a new colour in 2008), Cinnabar, Plum, and Sunflower (colours released in 2000, 2002, 2001 respectively). Mom and I started collecting these beautiful dishes that are manufactured by the Homer Laughlin China Co. in WV last year. http://www.hlchina.com/index.htm
We also managed to get to Joann’s for some great chicken and egg fabrics and a great print called, “Kittens at the Beach”. We even had time to get in a visit to another favorite stop of ours when we head south: Kohl’s. 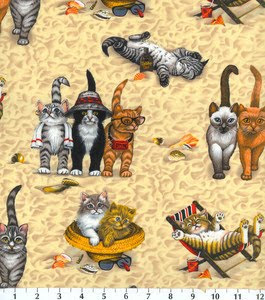 Thursday night, we decided that we were going to eat at the Cheesecake Factory. Both Mom and I chose pasta dishes. There was no way we could eat the amount of food that was presented to us in one sitting! Since we had a microwave and fridge in our hotel room, Mom suggested that we take our leftovers “to go” and eat them for lunch the next day. Great idea. The problem was that we had no room left for a piece of cheesecake either. Fortunately, we could take the cheesecake to go so the problem was solved. Later that night we enjoyed cheesecake and coffee in our hotel room. I ordered White Chocolate Macadamia Nut cheesecake and I believe my mom ordered a piece of cheesecake with lemon in it. http://www.thecheesecakefactory.com/#lobby

On Friday we weren’t due to meet up with the rest of the FABs until 2 in the afternoon. We had touched base with Pam and Linda the night before and we knew that they might be a little late arriving due to the traffic on the freeway between southern Oregon and Portland so we weren’t in a hurry to get to Fabric Depot. We weren’t expecting the heavy rush hour traffic we encountered on the way to Fabric Depot on a Friday afternoon in Portland. Thankfully, we had the steady voice of Garmin to guide us on and off of highways, off ramps, and down busy streets. I still find myself wondering how we managed to navigate through all that traffic to find the location of Fabric Depot in a big city that we had never driven in before. 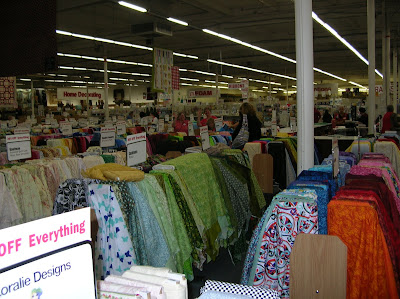 We were barely in the door of Fabric Depot when we were spotted by Linda. After hugs we connected up with Pat, her daughter Michelle, and Pam. We were given a small square of challenge fabric related to the upcoming FAB challenge and asked to find something to go with the fabric–a pretty light lavender/blue colour. I purchased a FQ of a pretty pink and violet batik. Not knowing what the challenge would be, I only purchased a single FQ and wished later that I had purchased more of that great fabric. Pam spotted a great floral that would be perfect for a 4 Patch Posie quilt. The last time I was with Pam over a year ago, she purchased a print to make a 4 Patch Posie quilt but used it in another project before she got to the 4 Patch Posie project. Pam was determined not to let that happen again. I guess we were drawing a bit of attention to ourselves as we were discussing the suitability of this fabric to a 4 Patch Posie pattern and just how much a repeat really was, that we had another quilter in the shop stop by to find out what we were up to. No problem, Pam ended up purchasing a “little extra” — more than what she thought 4 repeats was equivalent to. After all, you don’t want to run yourself short later on and what if Norma really did know what she was talking about when she was trying to explain that repeat thing. http://www.fabricdepot.com/

After we made our fabric purchases, we made our way back to Cher’s house for supper. Pat was driving one car and had the assistance of the navigator on her cell phone and I was driving the second car with the assistance of Garmin and my Mom. We started out ahead of Pat and ended up behind her on one of the freeways when we made decisions to change lanes at some point. Despite getting separated by traffic, we managed to pull into Cher’s driveway just behind Pat and Linda. Thank goodness for satellites and those wonderful little boxes that give you precise directions!

The next day we exchanged our friendship blocks. We took turns putting our blocks up on Cher’s design wall and taking pictures of them. 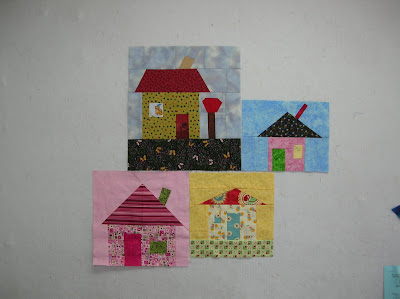 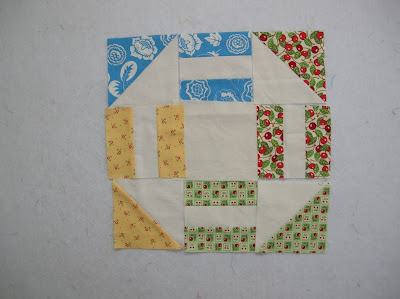 These block parts now belong to Pam. Pam has decided to put together these block bits into a quilt block that will depict a ring of friendship. The plan is to back the block with foam and quilt it in the ditch before framing it and putting it in her ME themed kitchen. 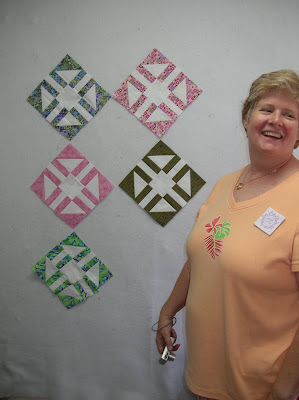 These blocks now belong to Linda. 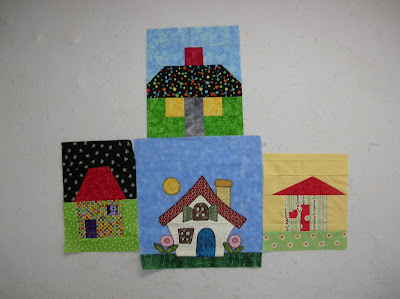 These wonderful house blocks now belong to me. 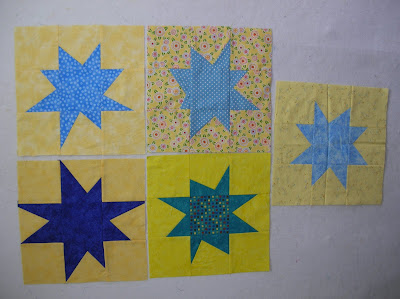 These are now Pat’s wonky star blocks.
On Saturday we took a break in the morning to visit quilt shop to close to Cher’s house. The shop was Fibers in Motion. I found two bright chicken prints and some great “go withs” to put with the chickens. http://www.fibersinmotion.com/

We decided that it would be a great idea to have lunch out since we were already in the proximity of a great little restaurant. We headed down the hill to Marco’s Cafe. Mom and I had eaten there last year when we met Cher for the first time in person and I was thrilled to be here for a return engagement. The food is great! http://www.marcoscafe.com/ 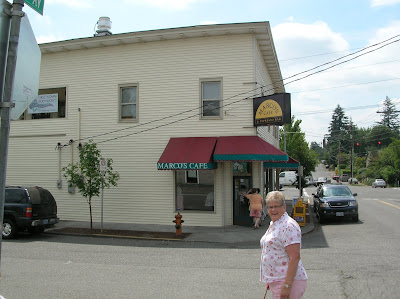 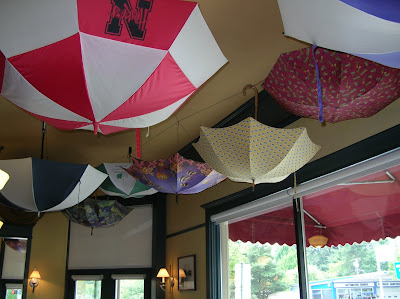 These are umbrellas that hang from the ceiling of Marco’s. Some of the umbrellas are very unusual and used to belong to locals who frequent the cafe making them all that more special.

By now you must be thinking that all we did on this retreat was shop and eat. Although those were two great activities that we did partake in quite a bit, we did actually get to piecing our blocks for our Strip Twist quilts. 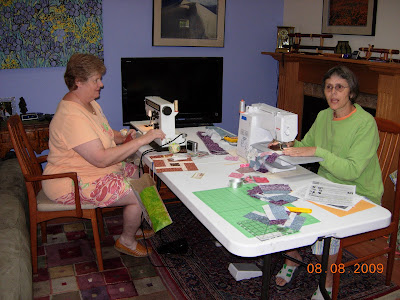 This is Linda and Cher. 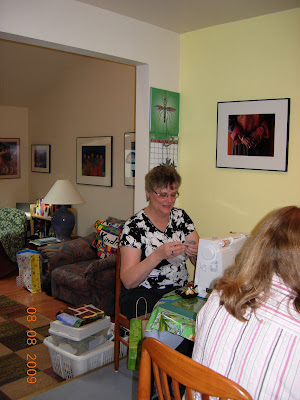 This is a picture of me piecing my blocks before Pam pushed her 4 Patch Posie squares my way. 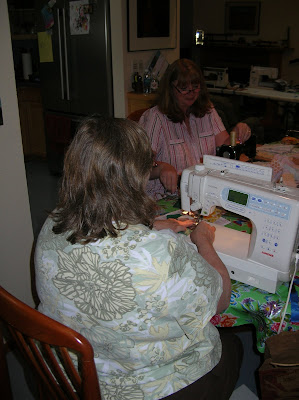 This is Pat in the foreground and Pam in the background. 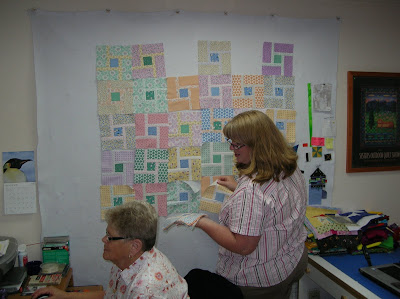 These are Pam’s Strip Twist blocks going up on the design wall Saturday night. That is my Mom sitting at the computer. Cher and Pam managed to hook my Mom into Farmtown on Facebook and make her a “neighbour” in the game. It looks like Pam is giving my Mom directions as to what fields of hers to plow so she can get a leg up on Cher in the game. Hmmmm 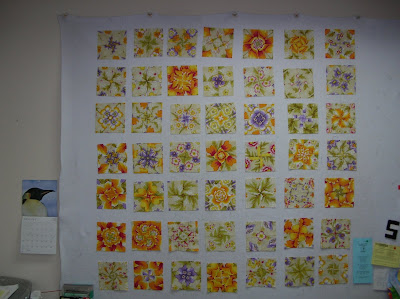 These are Pam’s 4 Patch Posie blocks. Yes, this is the fabric that Pam purchased in Fabric Depot the day before. Pam managed to convince Linda to cut her fabric yardage into the 4 repeats and then the required squares to make the blocks. After that, Pam convinced me to piece her blocks for her. There was something about guilt, making a round robin quilt, getting those squares home without mixing them up, and some sort of a dare involved in there somewhere. There is now significant pressure on Pam to finish piecing this quilt and not let it sit as a UFO. We will have to monitor the progress of this quilt carefully in the future! 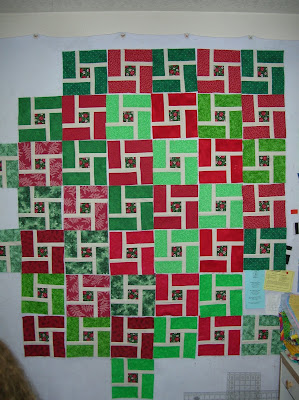 These are Pat’s Christmas themed blocks. 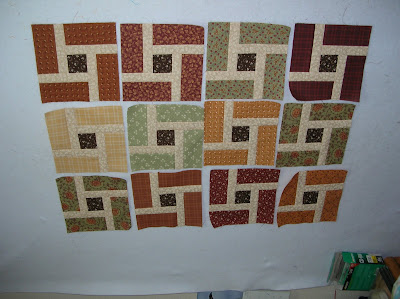 These are Linda’s blocks. 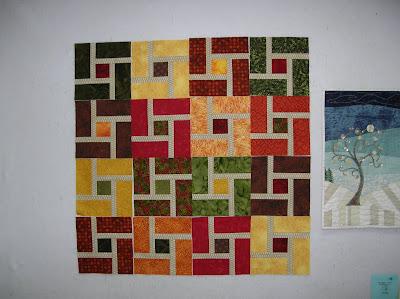 These are some of the blocks that I managed to piece before the weekend was over. 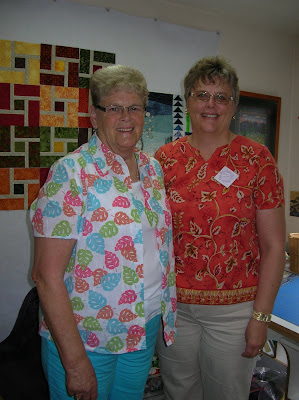 This is my Mom and I just before saying our goodbyes to the rest of the FABs on Sunday night. We headed home on Monday morning.
This was a great holiday and a FABulous quilting retreat. We have now all returned to our respective homes and are back “talking with our fingers” as Linda says.