It is so easy to get side-tracked. Today while enjoying my coffee and catching up on reading some blogs, I came across an inspiring quilt shown on Sharon’s blog: http://lookingbackmovingforward.blogspot.com/2010/01/january-15th.html

The quilt is called, Trail Mix. Sharon talks in her post about making the quilt with friends as a mystery over several months. She said that if those women knew in the beginning that they would be making a quilt from so many little pieces they might not have made it. However, because they made it over a longer period of time in groups of blocks, it was simple. Sharon also mentions that everyone made their quilt from their stash which reflected the fabric inventory of each quilter.

Sharon did not mention the magazine where the pattern was located in her post, but when I googled the name of the pattern, I quickly discovered that the pattern was in American Patchwork & Quilting’s June 2004 issue. 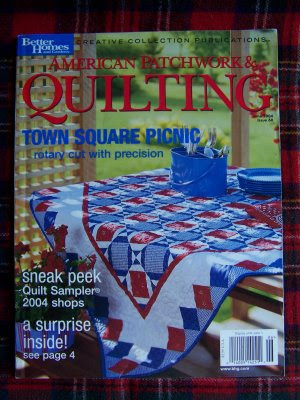 The more I looked at the pattern the more I realized that Sharon was right. This initially looks like a complicated pattern but once it is broken down into its components, it is quite manageable.

Later in the day when I was chatting with my friend Linda–http://catsnqlts2.blogspot.com/–I mentioned the pattern. We started discussing the possibilities and before you know it–we were both side-tracked. We both made lists at the beginning of the year of quilts and projects that we want to finish or start this year and here we are looking at starting something new once again! We both have reputations for going off on tangents and getting each other inspired to start new projects.

We are going to start with the four-patch blocks. These blocks are made from 3.5″ squares and as luck would have it, I already have a bin of pre-cut 3.5″ squares. Linda also has some of the required size squares as she regularly makes bow tie blocks from this size of square. We have decided that this will be a perfect leader/ender project for this year. Plans are to make our quilts from our existing scrap stash which will reflect our different tastes and personalities I am sure.

Cher–http://cherzoe.blogspot.com/– joined us on-line for a visit later on in the day and she too seemed to get caught up in the excitement of starting a new project made entirely from our respective stashes. It would seem that Cher is easily influenced by Linda and I. LOL I then sent a message to the other two FABS that were missing from this conversation–Pam and Pat–and asked them if they would like to join us in what we are expecting will be a year long project. Time will tell if this infectious enthusiasm for starting new projects will be caught by these two as well.

Here’s to making great to-do lists and allowing ourselves to be inspired by something new as it comes along!

3 thoughts on “Getting Side-Tracked”